Portland Oregon’s Democratic mayor, Ted Wheeler, has chosen to subordinate rule of law and protection of his citizens to the fascist mobs that erroneously call themselves “Antifa.”

For over five weeks this summer, Antifa members camped out in an area next to a U.S. Immigration and Customs Enforcement field office in Portland. They trapped office workers inside by barricading exits. During the night, they blocked traffic on the street that was also a key route to a nearby hospital.

According to journalist Andy Ngo, writing in the Wall Street Journal, when workers made frantic calls to the local police for help, Portland’s police chief, Robert Day, said he was “denying their request…” It could have something to do with the fact that Mayor Wheeler is also the police commissioner.

A woman who operated the Happy Camper food cart across the street from the office building was terrorized by the Antifa mob. She said they were wearing masks and threatened to harm her and burn down her cart. She called the police for help but obviously the chief chose to obey the mayor rather than protect one of Portland’s innocent citizens – because the police never responded to her pleas.

Finally, some hours later, the workers were evacuated by a team of federal officers but the protesters camped out next to the building and remained there for five weeks. After they finally left, the city was forced to send in a bio-hazard cleanup crew to deal with syringes and buckets of human waste left behind by the “campers.”

This was what Mayor Wheeler considered a peaceful, civil protest. He said, “I join those outraged by ICE actions separating parents from their children, and support peaceful protest to give voice to our collective moral conscience.” So his clear message is: Politically agree with me or you may be denied police protection.

Fast forward to this past weekend when Antifa and Black Lives Matter were again allowed to have free reign over Portland and its residents when they demonstrated against a police shooting of a 27-year-old black man. According to the Washington Times, the police stood by passively a block away from the protesters who stopped traffic at an intersection and demanded motorists move in the direction they wanted.

One motorist, 74-year-old Kent Houser, had thousands of dollars damage done to his car when he ignored Antifa and made a turn at the intersection against their direction. When asked about the incident Mayor Wheeler said, “motorists should feel completely safe coming into downtown Portland.” Of course they should. 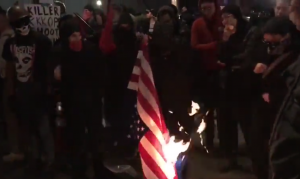 The protests turned to riots and violence on Saturday night as Antifa and Black Lives Matter clashed with a counter-protest group, Patriot Prayer, which took exception to Antifa’s anti-American demonstration and flag burning. (Watch the video of a courageous counter protester grab and try to save the burning flag.)

“‘This is the kind of street anarchy that routinely happens where I live,’ tweeted Mr. Ngo.”