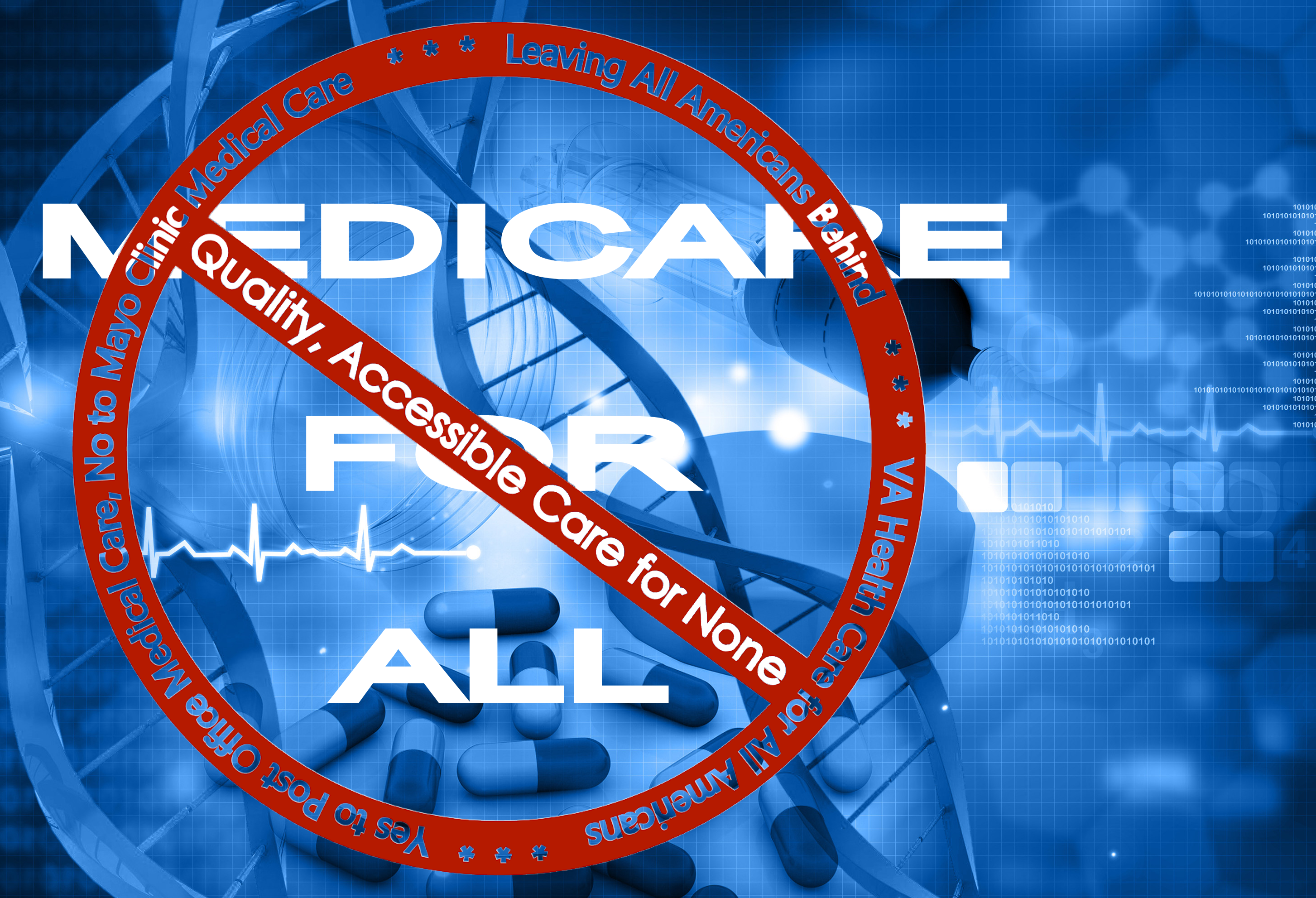 This proposal is a threat to every American citizen and a shot to the heart of the world’s greatest medical system.

Even in the unpredictable world of American politics, it is particularly surprising that self-avowed socialist, not even a member of a major national party, Sen. Bernie Sanders (I. VT) is spearheading the greatest government takeover of an industry in American history.  Equally surprising is this 77-year-old has the support of dozens of Congressional Democrats including nearly all Democrat presidential contenders in 2020.  His “Medicare for All Act” has 120 Democratic co-sponsors in the House of Representatives and a third of Senate Democrats.

A stunning poll released last summer by the Kaiser Family Foundation found that a majority (59%) of Americans now support single-payer or a government-run health care system (although this support drops by about 20% when respondents are told their taxes will rise). A recent Reuters poll says that 70% of Americans favorably view a Medicare for All type plan.

The research firm, YouGov conducted a poll of millennials and discovered that more (44%) would prefer to live in a socialist country over a capitalist one (42%). This group is 10% more socialist than the general public which is surprisingly quite socialist as well.

When the Patient Protection and Affordable Care Act (ACA) was passed in early 2010, the majority of American were clearly opposed to a government-run system. Democrats who controlled both houses of Congress at the time passed it with zero Republican support.  The political ramifications of this bold move proved initially costly to Democrats as this law was the catalyst for the Republican takeover of the House of Representatives in 2011 and the Senate in 2014.

But that was then. Now even most doctors appear to have jumped onboard the single-payer bandwagon. For nearly the entire 20th century the largest organization of physicians, the American Medical Association (AMA) was strongly opposed to having its doctors become professional bureaucrats essentially employed by the state.

A few years ago, the American Medical Student Association (AMSA) took up the charge. What many young doctors here in the United States may not know is that a primary care physician in Canada, the model for the Sanders’ plan, earns about two-thirds of what they earn here; less than half in Britain. Are these doctors prepared to have their earnings significantly cut?  Probably not.

A decade ago, 58% of physicians were strongly opposed to government-run health care in a national poll. More recently according to a survey by Merritt Hawkins, a physician recruiting firm out of Dallas, 56% of physicians shockingly support government-run health care.  However, a vocal minority of doctors who don’t want the world’s best medical care destroyed by a power-addicted political class are imploring their patients to ask if they want their medical care operated like the VA system or the Post Office.

As with all socialized systems, both the Canadian and British systems must ration medical care. But each deals with supply shortages slightly differently: Britain’s National Health Service (NHS) rations care by empowering its bureaucrats to deny the authorization for medical care by providers. At least in the United Kingdom private insurance still remains an option for those who wish to go outside the nation’s socialized system and can afford it.  But Senator Sanders, who has a lifelong animus against the private sector, plans to ban all private health care insurance outside the government’s monopoly.

With private coverage banned, this deceptively named “Medicare for All Act” would greatly diminish the coverage that about a third of those on Medicare currently have. Nearly 18 million seniors pay out-of-pocket for their Medicare Advantage plans. Without private insurers, no one on board the Sanders’ train has anything to say about what happens to individual state Blue Cross organizations, or what would replace supplemental insurance for Medicare beneficiaries.

Employers would be prohibited by this proposed federal law from covering their own employees, their families or retirees. (Sec. 107, Sec. 522) Are you a senior and think you need a joint replaced? It had better be “medically necessary” according to a government bureaucrat or you won’t get it. (Sec. 401) Get really sick, maybe life-threatening sick? The Sanders’ bill would limit the total amount the government has to pay for you in aggregate in any year. (Sec. 601) And does anyone really believe that the federal government will control medical privacy better than their family doctor? Or that his or her entire medical history won’t reside digitally at an NSA storage facility in perpetuity?

There is also a major misconception that such a plan would pay everyone’s health care bill or all prescribed medications. There is no OECD (Organization for Economic Cooperation and Development; 34 democracies with market economies) nation in which the state pays the whole tab. Sanders routinely points to countries that require considerable out-of-pocket spending for medical costs, but the American populace likely hasn’t heard much about that. For example, in Canada about 30% of costs are privately paid.

We’ve had a taste of “single-payer” here for decades. It’s called the Veterans Affairs (VA) system. The crisis surrounding the Veterans Health Administration received considerable publicity beginning in 2013 but its problems are nothing new. It is a highly centralized and highly bureaucratic organization. It is truthfully our first glimpse of what a “Medicare-for-All” effort might look like.

Modern day liberals are historical Progressives.  They are “utopianists,” those who believe themselves intellectually and morally superior.  Progressives claim that society can progress on an evolutionary scale only if their superior ideas are the ones enacted.  As such, most feel a (Darwinian) obligation to impose their perceived enlightened brand of moral understanding on the less advanced masses.

Socialism sacrifices liberty and condemns self-interest as enemies of the collective, i.e., the state. Thus, the state supersedes all loyalties connected to the family or God as the state is god on earth. All opposition must be destroyed with all options on the table including precision ad hominem warfare as taught by Saul Alinsky.

Old, lovable Bernie Sanders is a socialist. And a socialist is a utopianist. As Mark Levin says in “Ameritopia,” the utopianist lives his life in a fantasy world of “grand social plans and experiments.”

The progressive/utopianist is arrogant in his intent and delusional in his expected results. He dismisses history, knowledge and reason in his search for his holy grail – heaven on earth.