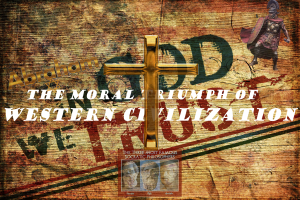 When He was executed on the cross under orders from Pontius Pilate, His followers were both grief-stricken and terrified that they would be captured and face a similar fate as their teacher. The death of Jesus Christ seemingly changed little at the time but His resurrection three days later changed all of human history.

Perhaps the strongest circumstantial evidence of Christ’s resurrection was the rapid change of His disciples following His crucifixion. Upon His death they were doubtful, frightened men who cowered in fear in an second floor apartment in Jerusalem. Following His appearances to them and others, they were transformed from scared, timid men who dreaded capture to bold, energized disciples of great courage who embarked on dangerous public missions to distant lands to confidently spread the gospel and proclaim the lordship of Jesus Christ.

They marched, evangelized and were martyred on three continents: From Rome to Ethiopia to India and all the way to the East Indies. All but one of the original disciples died violent deaths.

The most impactful of the disciples was not one of the original twelve. He was by an unlikely follower who, before his famous conversion on the road to Damascus, was a persecutor of Christians. Saul, a murderous, sinful, flawed Roman citizen, was transformed and called by God to spread Christianity to the gentiles and through the Roman world.

[God’s selection of the contemptible Saul introduced us to His future choices of some of the most unlikely individuals and situations to advance His goals.]

Much of (formerly Saul, now renamed) Paul’s ministry took place in occupied Greece. The New Testament was written and mostly communicated in Greek, the predominant language in the eastern Mediterranean region.

Paul taught that the resurrection of Christ meant believers were no longer under the old civil and ceremonial laws unique to Israel (though not moral laws which are unchanging). These were replaced by Christ Himself, in the flesh, to introduce God to the world.

This was His plan to expand mankind’s knowledge of Him from the small theocratic nation of Israel to a worldwide, multi-national, multi-ethnic, multi-racial Church to not just save humanity but to share His blueprint for a more civil, prosperous and fulfilling life.

Christianity initially spread especially rapidly among the poor as they heard an entirely new message: that they were as loved by God equally as much as the wealthiest, most powerful Roman citizen. Christian teachings gave the impoverished and destitute equality before God, a radical concept at the time. This “good news” for them was the opposite of Greece’s adoration of worldly greatness, intelligence and attractiveness. All these human fixations took a back seat to the spiritual beauty of the lowest and most homely in the eyes of God. The message of Christ gave them a new sense of dignity and optimism.

Never in history had the individual been so elevated. With Christ as the focal point, various tribes and races were called to subordinate their old loyalties and become one as part of His Church. Every follower was called to have an individual, personal relationship with Christ. It was the individual who was valued, loved and ultimately saved, not any group or class.

Therein lies the core of the difference between Judeo-Christian Western Civilization and nearly every other atheistic, human invented political or economic system: the Group versus Individual. Christianity told us we are valued as unique, individual creations, not just part of a collective.

[C.S. Lewis has written that we are not puppets; we can think, reason and made decisions for ourselves. Lewis said that if God exists, and he maintained He does, that He gives the utmost importance to our ability to freely choose Him – or reject Him. If He didn’t provide this freedom, choosing Him would be meaningless, we’d simply be puppets on a string. If God so values our ability to think freely without even His influence, what right then does any human have to take our freedoms from us? Answer: None.]

The New Testament’s historical account of the spread of Christianity stops about three decades after the crucifixion. Both Paul and Peter were martyred about 67 A.D. under Roman emperor Nero. Jerusalem was still the de facto home-base of Christianity until 70 A.D. when the Romans crushed a violent Jewish uprising by destroying the city along with its temple leaving only its western supporting wall revered today.

After the destruction of Jerusalem, the center of Christendom moved consistently over time toward Rome and would be perceived less by outsiders as simply a variation of Judaism. Still, by the end of the first century, the total number of Christians was likely in the few tens of thousands, hardly a rapid world-wide expansion.

Their numbers were kept down initially, by Nero who blamed a devastating fire in Rome on the heathen Christians. They were considered “atheists” since they didn’t believe in the Roman gods. The brutal deaths of untold numbers of Christian martyrs, many in the Coliseum as entertainment, is unimaginable. Entire families were hunted, captured, wrapped in fur like animals then devoured by lions or wild dogs. Some captured Christians were wrapped in flammable material, doused with oil and burned alive to provide illumination and depraved entertainment in Nero’s gardens.1

The persecutions continued into the second century under Trajan and lasted another 200 years.2 Though the aggressive hunting Christians subsided somewhat, if they were caught however, they were still brutally executed unless they renounced their faith. Though some recanted, most demonstrated amazing courage facing certain gruesome and horrific death.

An astonishing part of Christian history is the growth of believers during these Roman persecutions. Early third-century Christian theologian, Tertullian, told to a Roman prosecutor before his death, “The oftener we are mown down by you, the more we grow in numbers: the blood of the Christians is seed!”3

He was correct. During this bloody time, the number of Christians grew exponentially. Support networks were established and church communities consolidated. The persecutions brought together diverse Christian ethnicities that offered hope and encouragement to each other.

Widespread stories of the courage displayed by those martyred inspired both those who were already followers of Christ and also new generations of converts who marveled at the incredible bravery displayed by the faithful in the face of certain death, not just for themselves but often for their loved ones as well. The prospect of eternal life with a loving God after this life proved to be (then and now) enormously appealing.

This expansion of Christian believers, estimated to be over 6 million by the end of the third century was reason enough for emperor Diocletian to become far more aggressive with the persecutions.4 His goal was to eliminate this now more-than-pesky faith entirely throughout the empire. Christians were aggressively captured, churches and sacred documents were burned. It likely marked the darkest period in the history of the Church. But just as the apparent devastation of a forest fire can produce an explosion of new growth, such was the case with the Christian Church. It and Western Civilization were about to take a major step forward.