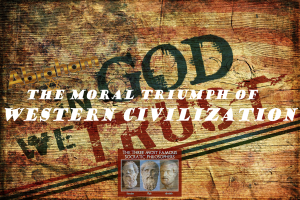 Western Civilization was seeded initially by the Jews, enhanced by the Greek philosophers, then enormously strengthened and widely spread by Christianity. It did, however, take a very long time for this crop to take root, grow and finally have its harvest enjoyed by humanity.

The development of the “West” had Judeo-Christian tenets as its foundation but the not-so-secret “sauce” included elements of Greek philosophy, influences from great intellects like Cicero, Augustine, Aquinas, Locke, Adam Smith and others. It could not have developed without the Scholastics and later, the Anglo-Saxons. Even the Christians martyred at the hands of Nero and other Roman emperors were enormously important to this story.

Roughly 2,000 years before the birth of Christ, Abraham, the (human) father of Western Civilization was born.

Genesis 12:1 – “The Lord had said to Abram, “Go from your country, your people and your father’s household to the land I will show you. 2 “I will make you into a great nation, and I will bless you; I will make your name great, and you will be a blessing.[a] 3 I will bless those who bless you, and whoever curses you I will curse; and all peoples on earth will be blessed through you.” (My emphasis)

As Judaism progressed, God revealed to the Jews a legal system designed to separate them from all other pagan tribes and their practices. For Christians, Judaism’s progression to the birth of Christ is the backbone of their faith. “(Judaism) provided the God of Christianity, their super-natural Creator, the notions of divine moral judgment and divine love, the God-based universal morality…, the Ten Commandments, …the sanctity of human life, the belief in a God of history and that history has meaning. All these and more came from the Jews and their texts.”3

The Jewish Torah (first five books of the Old Testament or “Pentateuch” in Greek) has “separation” as perhaps its most common theme. God had chosen this Jewish tribe to be His “holy” (or set apart) people. Jews came to learn that God is indeed all about separation: good from evil, light from darkness, order from chaos. And life from death.

God provided specific instructions to His believers to ensure that they separated death (and worship of the past) from life and the optimistic future of eventually spending eternity with their Creator. This segregation is most evident in the book of Leviticus which provides specific instructions for keeping apart anything representing life from death (e.g., eating meat [death] with milk [life]).

Before the Bible commanded us to hate evil, the very concept of good and evil was virtually unheard of in ancient times. Power and military might ruled so completely, evil wasn’t much of a consideration. Wars were initiated for greater power, prestige, territory, wealth and slaves.

After centuries of captivity in Egypt, the Jews needed well-defined guidance how to distance themselves in all aspects – physically, culturally and theologically – from the Egyptians. The Egyptian bible was the “Book of the Dead.” The culture was “steeped in death.”4 Its greatest monuments were the pyramids which were nothing more than enormous tombs.

God specifically placed limits on what powers the future kings of Israel would have which was far less then the unlimited powers of rulers of pagan nations. The king of Israel was to always recognize his inferiority and humble himself before God.5

As worship of the Canaanite god Baal frequently involved perverted sexual practices, God provided Israel with a strict sexual code. It is nearly impossible to overstate the importance of these codes to the ascendancy of the eventual Western world.

Israel was also set apart from the pagan world regarding the treatment of women. Pagan nations took women as sex slaves and treated them brutally, Israel was allowed to marry such women but never to treat them disrespectfully or cruelly.6

To say that God showed enormous patience while the Israelites persistently disobeyed His detailed commands would be a quite an understatement. Though they often veered off His chosen path, He never deviated from His commitment. The Jews were a raw, immature civilization that needed God’s guidance and the moral, civil and ceremonial laws designed to pave the way for the Messiah. As such, ancient Israel was a pure theocracy.

Interestingly, the concept of “Natural Law” was put forth in the Old Testament and also independently by the Greek philosophers. (For example, Psalm 19:1-6 strongly implies an inborn natural law or “conscience” evident to all.) This meant that nations other than Israel were not deemed innocent of immoral deeds simply because they had not received revealed laws like Israel had.  The gift of natural law (again, conscience to many) meant the people in these nations were still held accountable for their actions. Natural law thus supplements ethics provided by divine revelation.

Speaking of the Greeks…

Unquestionably, European history begins with the Greeks. They came down from the Balkans to the Aegean Sea beginning about 1900 B.C. and displacing the older Cretan civilization. The land has been called Greece since about 1300 B.C. but the area was unstable until about 900 B.C. The Greeks were the first civilized group in Europe.

Greeks formed small, independent “city-states” that were usually at war with each other. They included such cities as Athens, Corinth and Sparta. Some were democracies that allowed men (not women, slaves or outsiders) to vote. We know much about the ancient Greeks because they were the first people to record actual historical events, not just write about myths or legends.

Political science was born among the rich thoughts of Socrates, Plato and Aristotle about 400 B.C. Nothing like it had ever been recorded in history. Reason, communication, education and language were taken to new levels.

The Greeks were fascinated with the natural world and laid the early foundations of science. Disease, previously considered some type of demonic possession was understood in a more natural way. Great thinkers like Pythagoras discovered absolute mathematical truths.

Largely because of the independence of their city-states, they were conquered by Philip of Macedon and later controlled by his son, the brutal Alexander the Great (356 – 323 B.C.) who acquired territory into Asia as far east as India.

Interestingly, one of the results of Alexander’s conquests was to spread Greek writings and culture deep into Asia. In fact, much of Greek thought after the 4th century B.C. comes from the Middle East or Asia, especially from Alexandria in Egypt, and not through the region of Greece itself. Some of the ancient teachings, writings and philosophy of the Greeks were lost due during the conquest of Philip but later reacquired by a new, more powerful group in 146 B.C. — the Romans.

The Greeks had extensive influence on their eventual conquerors. Much later during the period called the Enlightenment, a considerable number of their works and writings along with their mythology were also embraced by much of Western thought and live on today.

It is almost a wonder that though they seemed so civilized and intelligent, they could believe in the (humanly flawed) Greek gods. Many of the Greek thinkers were likely closet ‘atheists’ so as to not risk public reprisals. After all, Socrates was famously executed for not believing in the gods.

They were, in many aspects, a society that respected virtue and order. Art and architecture reflected that orderliness of what man “ought” to be – “noble, dignified.” Rationality was valued and language enlarged.

This sounds like the Greeks were a highly moral people but they had some considerable shortcomings. Like being a culture dependent on slavery and addicted to extramarital sex. Physical work was considered lowly and worthy only of slaves or the lower classes. Energies were devoted to thought – and sex.

Man-boy sex was exalted in ancient Greece. It was a sign of honor and prestige to seduce hairless, prepubescent boys. Pederasty is derived from the Greek paiderastia, meaning love of boys. There are many ancient Greek artistic depictions of man-boy sexual activities. It was a luxury for the privileged – those with the wealth and time.

Misogyny was rampant. Men not only dominated in every aspect of society, they isolated their wives and daughters. Women were relegated to a much lower social status. Men (and their genitalia) adorned buildings, monuments and artwork.

Rabbi and author Dennis Prager has written that it is likely that Judaism is responsible for the notion of homosexuality and pedophilia. Before the Torah was given to the Jews, sex was generally between the more powerful (penetrator) and powerless (penetrated). Sex was ubiquitous. Men’s sexual appetite with anyone or anything was (is) insatiable. Though most societies had some sexual behavioral rules (e.g., incest), they were certainly not limited to sex within the confines of marriage. One of the undiscovered frontiers of human existence is the depth of male sexual depravity.

The Hebrew Bible produced the first sexual revolution. It “de-sexualized” God. It was the first time there had been any concept of a loving, non-sexual, singular deity. The gods in Canaan, Babylon, Egypt, Greece and Rome were highly promiscuous. They had sex among themselves and with mortals. They were invented by humans, were bigger than life and had bigger than life human sexual desires.

One of the most important contributions of the Torah toward Western Civilization were its commands to restrain male sexual behavior. As we’ll see in the “Marriage and Family” segment in this series, men are normally dominated by sexual activities and thoughts unless somehow restrained.

Historical societies that placed no restraints on sexuality were hindered in their advances. Productive work by men was usually subordinated to sexual pursuits. The Jewish Bible “forced the sexual genie into the marital bottle,” says Dennis Prager. (Abraham could have saved humanity considerable problems down the road if he had only stayed faithful to Sarah).

How was this done? By adding love to the sexual mix. It produced a far more satisfying and more fulfilling activity. The woman was elevated in stature, had much greater security and was no longer considered morally subordinate as the one ‘penetrated.’ Children benefited greatly as well.

Marriage provided the vehicle for both husband and wife to complement each other and commit to a sexually satisfying relationship fulfilled by emotional love. True faithfulness immensely strengthened the nuclear family. It became Western Civilization’s cornerstone.

The groundwork was now in place for society to move forward as men moved from often-times (sexual) predators to more civil, moral and productive individuals ready to channel their energies into beneficial pursuits and accomplishments.

The later dominance of the Western world is in large part due to what occurred with this Jewish tribe in the Middle East: one that produced the greatest sexual revolution in history. And though initiated by Judaism, it was ultimately taken to the world by Christianity.

3- Prager, Dennis. The Case for Judeo-Christian Values. Series of Articles from Townhall.com. 2005.