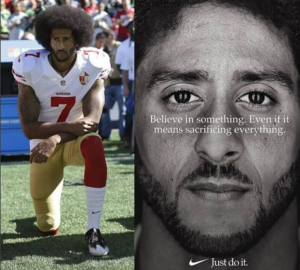 Are white police officers mostly targeting blacks or more likely to use lethal force in confrontations? No.

A 2015 Obama Department of Justice report on the Philadelphia Police Department found that black and Hispanic officers were far more likely to use their weapons with a “threat misperception.”

University of Pennsylvania criminologist Greg Ridgeway conducted a study of the NYC Police Department and discovered that black officers were over three times more likely to fire their weapons at the same scene as white officers.

Black author Larry Elder reported on another study. This one by professors of Michigan State and Arizona State universities. The report’s abstract says, “‘ We benchmark two years of fatal shooting data on 16 crime rate estimates. When adjusting for crime, we find no systematic evidence of anti-black disparities in fatal shootings…”

In fact a recent study by African-American Harvard economist Roland G. Fryer, Jr. found, “On the most extreme use of force – officer-involved shootings – we find no racial differences in either the raw data or when contextual factors are taken into account.”

Elder says that a few years ago, the Obama DOJ studied “Felony Defendants in Large Urban Counties…” (75 of the largest counties) and found that blacks had committed 45% of assaults, 62% of robberies and were 57% of murder allegations while being just 13% of the country’s population.

Why are mostly young black males committing so much crime and nearly taking over many neighborhoods?  Much of it has to do with a multi-generational, reinforcing culture that believes fathers aren’t necessary in raising children. More than 3 out of every 4 black babies are now born to unwed mothers. Without a responsible and loving father in their lives, many girls follow the paths of their mothers and grandmothers seeking male affection and many boys seek that same male (father-figure) affection which unfortunately makes them gravitate toward gangs or other unsavory adult males.

Black Lives Matter was formed after (what the Washington Post says was) the lie that Michael Brown had his hands up and was surrendering just before he was murdered by officer Darren Wilson in Ferguson, Missouri in 2014. It should be no surprise that in the two years following, violent crime increased in two consecutive years for the first time in a decade due rage propagated by the lie and what what MacDonald calls the “Ferguson effect.” 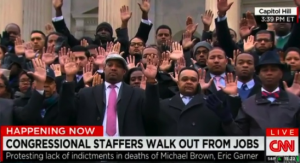 If Black Lives Matter used “hands up, don’t shoot” as its mantra, Blue Lives Matter might use “hands off, don’t condemn”as its theme. Consider this: Statistics show that officers are 18 times more likely to be killed by a black male than they are to kill an unarmed black. Police also know that entering these high-crime neighborhoods, stopping suspicious actors or even just asserting an intervening presence can be a no-win situation for them. You can be vilified only so many times — or routinely have investigations stymied by an anti-snitch mentality that pervades some areas — before you decide to back off. This so-called “Ferguson effect” — and what could now be amplified to included the Black Lives Matter and Kaepernick effects — appears to have caused the police to disengage in many high-crime areas.

Demonize the police. Force them to back off. Keep the criminals out of jails and on the streets. Have the bad guys know they have less to fear from the cops; enticing them to become emboldened — to escalate their criminal activity with impunity.  The “no-go” zones then grow in number, size and potential for violence.

Something must be done soon or many of these neighborhoods will be completely lost to criminal gangs (if they haven’t been already). Innocent, law-respecting residents are terrified to talk to the police or admit to having witnessed a crime. The prospect of having to testify is a non-starter as it could place their lives and the lives of their loved ones in real jeopardy. They perhaps correctly believe they have far more to fear from gang or criminal retribution if they “snitch” than they do by keeping their mouths shut and simply hoping they won’t be a crime victim in the future.

It is a devastating that so many black kids are stuck in rough neighborhoods and desperately want to get out to take advantage of America’s extraordinary opportunities But without an interactive but assertive police force taking the criminals off the streets, they’ll have little chance to escape their hood.

I suspect Colin Kaepernick may even have the best of intentions. This tragedy certainly didn’t begin with him or Black Lives Matter. Unfortunately though, these additional killings may be the true legacy of them and their supporters.