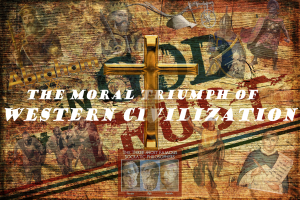 When a command economy such as Rome’s reigned, there was little need to find non-human means of power or production as an constant pool of available of slave labor existed to perform such duties. The Romans understood water’s ability to produce power but saw little reason to exploit it. Water power was one of the first sources of energy not utilizing humans and after Rome, water wheels were invented and widely used in Europe.

Windmills were an innovative source of energy as well and were even more widespread than water wheels. They were all over Europe by the end of the 12th century. Such innovation-seeking, especially in the production of energy, was a core element of early European history and separated it from the rest of the world. It also marked one of the early economic examples of innovation being driven by (the beginnings of) Christian Europe’s moral repugnance of slavery.

For the past three centuries or so attempts have been made by historians and others to paint the period from the fall of Rome to the Renaissance period (about the 15th century) as the “Dark Ages.”

These were considered “dark” because these historians and philosophers maintained that nothing of intellectual significance had occurred between the fall of Rome and the period of rediscovery of the Greek and Roman achievements named the Renaissance and Enlightenment. The latter name was intended to show that the “Dark” age of religious superstition and ignorance had been replaced by the intellectually “enlightened.” Old, antiquated religious (i.e., Christian) dogma had finally been rejected for reason, science and technological progress.2

In truth, those who called the Middle Ages period (from the 12th to mid-15th centuries) “dark” were bitter anti-Christian, anti-religious secular zealots who have dishonestly censored the extraordinary achievements made during this period.3

Around 1100, most European towns and villages were beginning to free themselves from feudalism. The larger places became independent, self-governing state-like cities: The capitalistic centers of Venice, Genoa, Milan and Florence and also other regions like Flanders (Belgium).

The areas still technically in the Holy Roman Empire were mostly independent as well. These included Strasbourg, Hamburg, Frankfurt, Nuremberg and other places around the North and Baltic Seas.4 These cities enjoyed de facto autonomy due to a distant and weak “emperor.”

Recall that originally feudalism evolved on the mainland for enrichment of the lords and purportedly for matters of security against bands of outlaws for the peasants. These fiefdoms had just minimal freedom.  They were quite different from the independent city-states; places like Germany, Italy and the Netherlands. (Ironically the independence of these places actually prevented them from unifying into nations until the 19th century.) France and England had considerably fewer independent cities during this period because their stronger feudal systems. Over time more towns were absorbed into monarchies and eventually countries.5

There are clear reasons why capitalism arose and flourished only in Europe. As we saw in Part 9 of this series, one of the foundational requirements for technological advancement and innovation is private property rights and protection, one of the key principles of Western Civilization.

Augustine had maintained that “private property was a natural condition.”6 After all, the Eighth Commandment, “Thou Shalt Not Steal,” requires another person’s ownership of something as a precondition. Thomas Aquinas agreed with Augustine. So did William of Ockham who argued that rulers could not arbitrarily seize property owned by those they ruled. Private property became a fundamental concept of political liberty and it originated with Christian theologians.

About a century ago, German sociologist Max Weber in his “The Protestant Ethic and the Spirit of Capitalism.” wrote that capitalism arose only in Europe because of Protestantism. But when former Augustinian monk Martin Luther posted his Ninety-five Theses on a church in Wittenberg in 1517, capitalism was already flourishing.

Few inventions in history have had a greater impact on human progress than invention of the heavy plow that allowed for a deep furrow. It revolutionized farming. Combined with new harnessing methods (well-padded collars) for horses that permitted them to pull as much weight as oxen but were much faster, agricultural production surged.

This made farming far less labor intensive causing many laborers to move to towns and cities in their search for other vocational opportunities. They found themselves in high demand. Craftsmen were needed and potential “apprentices” were welcomed. Vibrant local trades developed.7

Within most towns, craftsmen developed guilds for perpetuation and protection. The guilds trained new generations of craftsmen under the apprenticeship program but also offered protection of their members from outside competition. Young trainees became apprentices under a master then, after a period of years, became a journeyman, who was now formally and publicly recognized for his skills. As he continued in his craft, he eventually was accepted as a “master” or true expert in his field. These crafts included stonemasons, carpenters, dyers, goldsmiths, weavers, tailors and numerous others.8

These guilds were highly protective of their members. The entry of new apprentices into these guilds was often closed depending on the demand for their services. Even merchant guilds were organized for protection, i.e., make conditions as difficult as possible for the entry of new competition. This illustrates that free-market capitalism has rarely been pure — even close to its birth. [Virtually every participant throughout history even from the earliest days of capitalism has, at some point, sought protection from wealth-reducing competition including both industry and labor. The strongest capitalistic or wealth-producing societies have also been the most vigilant in thwarting competition-reducing efforts.]

Three other inventions had tremendous effects on living standards in medieval Europe: chimneys, accurate clocks and eyeglasses. Chimneys allowed rooms to be heated with fireplaces that didn’t smoke up the room. Before eyeglasses were developed, large numbers of skilled craftsmen lost their productive capabilities in middle age because they could no longer see clearly. Eyeglasses (invented about 1285 in northern Italy) put these skilled craftsmen back in operation. Amazingly, even by 1492 when Columbus sailed to America, eyeglasses were found only in Europe.9 Mechanical clocks were invented shortly thereafter and existed only in the West.

Textile production and machinery development was also accelerating. Weaving hadn’t changed much for centuries prior to the invention of treadle (foot) -powered loom. Certain regions became cloth-making centers and developed large textile industries. Flanders (Belgium) developed the manufacture of very high quality woolen cloth due to the local atmosphere and local skills. These fabrics could not be found anywhere else and were soon desired in many places.10

[BLACK PLAGUE
The Black Death hit Europe with a vengeance around 1347. By 1351, the continent had lost between 33% and 50% of its population. England may have lost 70% of its inhabitants. The devastation was unimaginable. No region, no town and no family was left unscathed. Until this time, concerns about survival ruled with cleanliness and hygiene given a much lower priority. Medicine was still primitive; woefully inadequate to deal with a pandemic.

The Plague was to Europeans what the Mongols were to the Muslims. Many concluded that this was due to God’s wrath for unrighteousness. Some Christians blamed the growing Jewish population for poisoning water supplies resulting in the murder of thousands.

The aftermath of the Plague had far reaching consequences and for the survivors, many were not all bad. A major one was the narrowing of the income gap between laborers and landowners. The amount of land obviously didn’t change but the available worker pool was enormously shrunk. With demand for produce collapsing, the value of land tanked as well. Much acreage was repurposed from grain farming which is labor intensive to animal husbandry which is not. Meat and dairy products became far more common. Many former farms were reforested.

Similar circumstances occurred in the cities. Surviving craftsmen were in high demand. Some authorities tried to impose wage controls to keep demand-driven compensation artificially low. Such government directives always produce shortages and this situation was no exception.

The Plague forced many cultural changes in Europe. Serfdom went into irrecoverable decline and upward mobility was set in motion. It took a long time for an entrenched system like feudalism to expire but, as former serfs moved into cities and towns, it was irreversibly weakened. Monasteries were also hit particularly hard and never really recovered their previous clout. But the need to replenish the clergy resulted in the establishment of new colleges along with the acceleration of many labor saving innovations.]

8- Stark. The Victory of Reason.