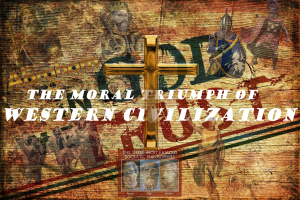 The Crusader movement was born of the continued Muslim advance into Europe, the outrage at the destruction of the Holy Sepulcher and rampant Christian persecution in the Middle East.

The first unofficial crusade began in 1095 by a radical monk named Peter the Hermit. Peter was a zealot who had better oratory skills than military cunning. Peter collected an army that indiscriminately attacked Jews and even other Christians as it marched toward the Holy Land. He never made it. His army was slaughtered by the Seljuk Turks in Anatolia (modern day Turkey).

The “official” Crusades began in 1096 and lasted — off and on — for almost 200 years. Counting the effort by Peter the Hermit there were at least 10 separate incursions. The First Crusade had the greatest historical importance.

It began after Pope Urban II had rallied the armies of Hugh Vermandois, (brother of Philip I of France), Godfrey (of Bouillon), his brothers Baldwin and Eustace, Robert II of Normandy, Bohemond (of Taranto) along with his nephew Tancred and Raymond (IV of Toulouse).

The armies captured Nicaea in 1097, defeated the Turks at Dorylaeum and captured Antioch in 1098. In early 1099 as the crusaders marched toward Jerusalem, they were actually given free passage by Muslims along the route.

They laid siege to the city in June, 1099 and quickly forced Iftikhar al-Dawla, the Fatimid governor of Jerusalem, to surrender. Though he was granted safe passage and permitted to leave, few others escaped the epic slaughter at the hands of these “Christian” Crusaders. The number of dead likely numbered in the tens of thousands. Tancred was infuriated after the group of citizens to whom he had given his banner (providing protection) were also massacred.

Following the victory, Godfrey declared the city to be the (Latin) Kingdom of Jerusalem and became its ruler with Tancred being named the Prince of Galilee. The following year Godfrey’s brother, Baldwin, became its first king after Godfrey had died.

The First Crusade was considered a success in that the Holy Land was recaptured and produced a 30 year period of relative calm. Only a few thousand infantry and a couple hundred knights remained to defend the Palestinian region as most returned home to Europe. [The knights that remained became known as the Knights Templar, founded in 1119 on the Temple Mount in Jerusalem.] The crusaders who returned home to Europe were welcomed home as heroes as most believed these warriors had fulfilled their mission from God.

The military success of this violent “Christian” war machine was widely acclaimed. Similar to Charlemagne’s violent era, the warrior Christian was again highly exalted. Had the First Crusade been considered a failure, it’s likely Crusader-era would have quickly ended.

The Muslims continued their aggression into Christian lands as well. In 1144, the Turkish Atabeg (prince) of Mosul found Edessa (in modern day Turkey) vulnerable and captured it. His aggressive act resulted in the Second Crusade launched in 1147 by Holy Roman Emperor Conrad III and King Louis VII of France. Their armies “traveled” — indiscriminately ravaged — through the Balkans destroying much of the territory under Byzantine emperor, Manuel I who assisted in their safe passage to Asia Minor just to be rid of them.

The Germans who already had been severely weakened by Turks joined them in a joint attack on Damascus (Syria). The offensive was a total failure possibly due to internal treachery among competing Latin princes. These crusaders found that though Muslim armies like the Fatimids in Egypt were not a match for them, the Turks were more than they could handle.

But also in Egypt, perhaps the most famous Islamic military commander in history was beginning to overpower all who opposed him starting with the Fatimids in 1171. Saladin (al Ayyubi) was a Sunni of Kurdish ethnicity who now reigned as Sultan of Egypt (and inland Syria). Saladin consolidated much of the Islamic world and initially had peaceful treaties with Christian overlords in the Middle East.

Reginald de Chatillon had irritated Saladin by attacking Arab caravans and breaking treaties. War broke out when Reginald foolishly tried to seize Mecca and Medina. Saladin’s army met the Christian forces which had consolidated under King Guy (of Jerusalem) at the Horns of Hattin in 1187. This battle made the name of Saladin still revered today in the Islamic world.

Saladin crushed Guy’s army so decisively that the crusaders could not adequately defend virtually any of the territories gained by the First Crusade. Three months later Jerusalem fell to Saladin.

The Third Crusade was initiated by Pope Gregory VIII but directed by Richard I (the Lion-Hearted) of England, Philip II of France and Holy Roman Emperor, Frederick I. This crusade had problems from the start. Frederick actually died before he made it to the Holy Land. Richard and Philip were suspicious allies. They met at Akka (Acre) in 1191. They captured Jaffa (in modern day Israel) in July, 1191 after which Philip went back to France.

Richard remained and made a truce with Saladin resulting in Christians keeping Jaffa and a narrow strip of land giving them passage to the Holy Sepulcher in Jerusalem. They also kept Antioch and newly acquired Cyprus. Richard left the region in late 1192 officially ending the Third Crusade.

Shortly thereafter, a new and surprisingly civil relationship developed between crusaders and Muslims. A truce reigned from 1192-1244 with Christians retaining their holy places in Jerusalem, Nazareth and Bethlehem. Trade and cultural exchanges were common.

Though Saladin died in 1193, his legendary victories showed Muslims no longer had reason to fear the European crusaders. Periodic “skirmishes,” a.k.a. Crusades #4 through 9, continued to create friction between the two civilizations. These considerably smaller crusades were likely caused by the ambitions of the various kings and popes trying to recapture the glory and acclaim of the impactful First Crusade.

There were other changes in Europe as a result of the Crusades: The military expeditions had required the expansion of Christian Mediterranean seaports, the Byzantine empire had been considerably weakened, many large, protective castles had been built throughout the areas most traveled by the crusaders and the focus on the military had European secular leaders and monarchies gaining power at expense of the popes.

Before the rise of Islam, most of the Middle East was Christian with majorities in Iraq, Egypt, Jordan and Syria.13 And though the Crusades were far from being considered militarily successful, they did check Islamic incursions into Europe that had previously occurred into Spain, parts of Italy and the Balkans.

The Crusades were a passing thought to Muslims by the time they were over in 1291 as the Islamic world was reeling from the devastation caused by a more powerful and ruthless foe that would define historical barbarism to this day.

In 1215 the Magna Carta (Latin for “Great Charter”) was agreed to by King John of England and a rebellion by the island’s barons. The rebellion didn’t last but the (finalized in 1225) agreement was revolutionary. The charter of liberties limited the power of future sovereigns and served as the “foundational document for the English system of common law.” It was an historical achievement.

By 1215 a Mongolian warrior named Genghis Khan had already conquered the territory from the Caspian Sea to the Sea of Japan.

His territorial ambition would cripple the cultural and technological progress of the Islamic universe — and negatively impact its relationship with the Christian world for over seven centuries as well.

The Mongols astonishing destruction of Islamic cities happened when Muslims were feeling quite confident about their cultural advancements and military capabilities after holding off the European crusaders for decades.

The world’s cultural landscape was permanently altered when Genghis (who died of natural causes in 1227) launched his attack on the Islamic world in 1219299 and completed by his successors, notably his grandsons, Kublai and Hulagu, who did the most damage.

In 1215 the Islamic world was flourishing in what many have called the Islamic Golden Age. Christians even assisted inquisitive Muslims in translating into Arabic much of the information they had acquired from the ancient cultures (e.g., Greek). By the early 13th century, Baghdad was the world’s largest and most prosperous city with a population exceeding one million and protected by a military force of 60,000.

[The Mongols (a.k.a. Tatars) were born to conquer. They learned to ride horseback at age 3 and shoot bow at 5, routinely slept in saddle, could go great periods without food and rarely bathed (if at all). The Mongols hated buildings. When they conquered a city, they would kill all, including women and children. Often the flood of blood would intoxicate them. They would destroy buildings and often build pyramids of severed heads and char the bodies.]

Perhaps history’s bloodiest massacre occurred on February 13, 1258 when Hulagu Khan entered the city of Baghdad after a 13 day siege. As many as 800,000 of the city’s inhabitants were slaughtered. Consistent with their modus operandi, the Mongols severed ears to keep a tally of the number of the dead.

The city was completely razed: All the buildings including the palaces, mosques, churches and libraries were destroyed. Baghdad’s “House of Wisdom” which contained perhaps the world’s largest collection of books at the time was burned with thousands of books thrown into the Tigris River that ran black with ink and blood.

At its peak, the Mongolian warlords controlled about three-quarters of Muslim-inhabited land. After the loss of Baghdad, the de facto “capital” of the Islamic world shifted to Egypt. And only a year after the siege of Baghdad an Egyptian military leader named Qutuz became an Islamic legend when he defeated the Mongols in southeastern Galilee. The news of his victory spread throughout the Muslim world giving them the courage to initiate widespread uprisings and eventually, by force and the conversion of many Mongols, reclaim their previously held land.

In the aftermath of Mongol invasion Islamic leaders concluded that Allah permitted this unimaginable destruction and millions of deaths of his chosen people because they become infatuated with worldly pursuits and had shifted away from the exclusive study of the Quran and full-time worship of Allah.

After Qutuz’s victory, one Muslim writer put it this way: “This battle proves … no matter how weak and fragmented Muslims get, once they go back to the pure and straight Path of Allah’s Prophet … they will be victorious. … no matter how strong and superior the banner of disbelief and tyranny might become, it will be defeated one day.”

This conclusion by Islamic leaders why Muslims had been victimized by the barbaric Mongols effectively kept them in the Middle Ages until the twentieth century when oil was discovered. It allowed European Christians to quickly leave this previously flourishing civilization way behind.