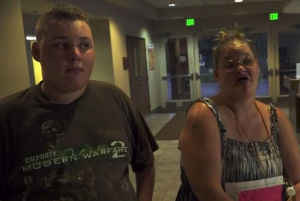 Most school districts across the country have variations of what are commonly known as “zero tolerance” policies. (The name makes little sense given that we’re supposed to place a high value on tolerance.)

In an effort to avoid any accusation of discrimination, “zero tolerance” policies are favored since they eliminate human judgment or discretion.

In some cases and for some offenses, this policy has gone so far that school districts literally don’t care who is the perpetrator of the offense or the victim.  Administrators just give out blanket punishments.

Consider the case of a 14 year-old, Sacramento, California boy with both mental and physical disabilities who was suspended for five days for defending himself. Yes, that’s right. Defending himself.

Sacramento station KXTV ran the story of Cameron Kenney who suffered a concussion after being assaulted by schoolmates. Though he has a paralyzed left arm, he fought the bullies off.

When his mother was informed of his suspension, she immediately protested to the school district. When she was shown a video of Cameron defending himself by fighting back , she was informed that this was what the district considered “mutual combat,” meaning the victim (a special needs child in this case) is given the same punishment as the perpetrator.

So today’s lesson clearly is that if you child isn’t fast enough to run away from the bullies,, just tell him to take the beating. If he doesn’t end up in the hospital at least he won’t get suspended from school. Unless of course, covering up in the fetal position while being pummeled is considered “mutual combat.”