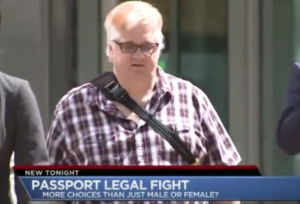 A federal judge in Colorado ruled that a “non-binary” Navy veteran, Dana Zzyym, does not have to indicate whether he/she is either male or female on the passport application. The plaintiff said he/she is neither and didn’t want to state an untruth on the application because the penalty would be a perjury charge.

The judge said that under the Passport Act of 1926, the State Department did not have the authority to enforce a “binary-only gender policy.”

Zzyym’s lawsuit began four years ago under the Obama State Department and continued into the Trump administration.