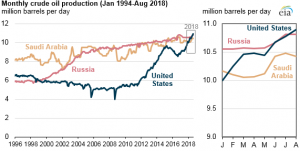 The United States Energy Information Administration (EIA) has just published their most recent estimates that show America is number one in oil production.

For the first time in two decades the U.S. now exceeds the oil extracted in Saudi Arabia and Russia since 1999.

Much of the growth is the result of increased production in western Texas, eastern New Mexico, the Gulf of Mexico and of course, the Bakken region in Montana and North Dakota.