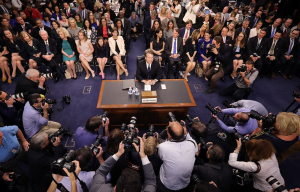 New unsubstantiated allegations surfaced this weekend in the New Yorker by reporters Jane Mayer and Ronan Farrow of #MeToo fame. The article accuses Brett Kavanaugh of exposing himself to a drunk classmate when they were both law students at Yale.

Although Kavanaugh’s former classmate Deborah Ramirez was “reluctant to characterize Kavanaugh’s role in the alleged incident with certainty,” in early discussions with the New Yorker she subsequently became certain and formally made the incendiary claim to the reporters after, as she describes it in the article, “six days of carefully assessing her memories and consulting with her attorney.” (Good to know that 6 days with your lawyer can clear up 35 years with a confused memory. And I’m still not sure what “assessing your memory” means.)

Read moreThe Left will do anything to stop the Kavanaugh nomination