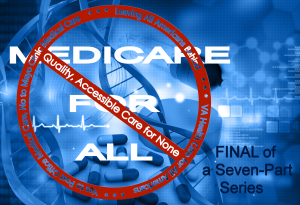 (Fourth in a seven-part series: Medicare for All – Quality and Accessible Care for None)

First of all, it must be stated: Everyone in the United States has access to quality medical care regardless of ability to pay in America’s great hospitals.

It is a misconception, and a common cry with the “Medicare for All” crowd that that because many in America don’t have health insurance, they aren’t able to receive medical care. As virtually any Emergency Room physician or nurse will convey, that isn’t true. In most cases, hospitals would treat these uninsured patients anyway, but they must do so because of federal law.

The Emergency Medical Treatment and Active Labor Act (EMTALA) was passed in 1986 as part of the Consolidated Omnibus Budget Reconciliation Act (COBRA). It states that all hospitals under the CMS (Centers for Medicare and Medicaid Services) system, must examine and treat essentially anyone who walks into the waiting room.

As we as a nation seriously consider whether or not we want a socialized system for our medical care, many would be surprised to learn that our hospitals are not in very good financial shape. Yes, of course they see the expansions and exorbitant hospital bills and immediately assume our medical centers are overcharging for care and loaded with money. For some elite centers this may be true, but overall, hospitals are not in good financial condition and would be irreparably damaged by a single-payer, socialist, “Medicare for All” type system.

Read more“Medicare for All” would destroy America’s great hospitals

(Third in a seven-part series: Medicare for All – Quality and Accessible Care for None)

Those touting the “Medicare for All” plan are using the phrase to entice those with just a surface awareness of what Medicare actually is into blindly jumping on board the bandwagon. In fact, the phrase is extremely disingenuous (albeit politically brilliant), designed to intentionally mislead the an public. (It is not so dissimilar from the deceptively named “Patient Protection and Affordable Care Act.”)

The goal is to seduce a mostly uninformed citizenry into supporting a concept that sounds like they’ll (1) never again have to pay anything for medical care; (2) such care will always be readily available when they want it and (3) medical care in the United States will remain top notch.

What Sen. Bernie Sanders and his supporters say they really want is a Canadian-style, government-, state- or bureaucratically-run health care system and not a plan similar to Medicare here in the U.S.

(Second in a seven-part series: Medicare for All – Quality and Accessible Care for None)

The core “moral” principle supporting the Medicare for All proposal is “health care is a right.”  This is not so. Free health care is not a human right, no more than free food, clothing or shelter are human rights. An intrinsic right can only come from a transcendent being – God.  Kings don’t have “divine rights,” they have “divinely gifted rights” – like all the rest of us do.

No human right can demand the involuntary servitude of another person – either by being forced to provide his or her medical expertise free of charge, or by having the state confiscate the private wealth of others to pay for the care of those who don’t pay. Intellectuals invoke the claim of “rights” even when they can cite no basis or reason. They just claim it, like saying everyone has the right to “affordable housing” or a “living wage.”

The two nations most prominently cited as the darling models of single-payer systems for the Medicare for All crowd are Canada and Great Britain.

Read moreCountries with socialized medical care and the misconception of “rights”