This week the New York Yankees stopped using a recorded version of Kate Smith’s “God Bless America” that had been played during the seventh inning of each home game since 9/11.

Just a day later, the Philadelphia Flyers announced they were removing the Kate Smith statue next to its sports complex that was erected as a tribute to the deceased singer whom the team had adopted as its good luck charm after it won the Stanley Cup in 1974.

The Flyers released this statement: “While Kate Smith’s performance of ‘God Bless America’ cannot be erased from its place in Flyers history, that rendition will no longer be featured in our game presentations. And to ensure the sentiments stirred this week are no longer echoed, earlier today we completed the removal of the Kate Smith statue from its former location outside of our arena.”

This controversy began when someone notified the Yankees that Smith had performed two seemingly racist songs back in the early 1930s: “That’s Why The Darkies Were Born” and “Pickaninnies’ Heaven.” The Yankees responded in typical “politically correct” fashion by banning Smith’s rendition.

Clearly both songs have cringe-worthy titles (and lyrics) but to use just these two recordings (of the apparently 3,000 she recorded in her lifetime) against this great woman who was beloved and admired by millions is unconscionable.

The first song, “That’s Why The Darkies Were Born,” was also recorded about the same time by African-American singer and civil rights icon, Paul Robeson. Some believe that Robeson recorded the song as a spiritual in which blacks in America took “strength from their hardships and suffering to attain their goal of racial justice and eventually, the Promised Land.” The Broadway revue song was intended as a satire of supremacist bigotry. 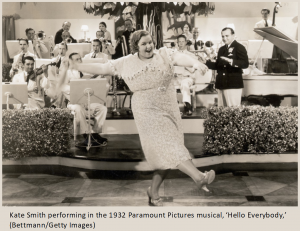 The other recording of “Pickaninnies’ Heaven” was a featured song in the Paramount Pictures musical film, “Hello, Everybody!”.

Smith obviously didn’t refuse to sing the song but for the film she was under the employ of Hollywood bigwigs a little more than a decade after women were first allowed to vote. Her editing/censoring authority in the film was likely nonexistent. Will the actual corporate producer of the musical, the company that has produced films like Indiana Jones, Iron Man, Forest Gump, Mission Impossible, etc. be boycotted or condemned like Smith?  It’s highly doubtful.

By taking this public action the Yankees, in particular, have invited a look into its racial past.

Though the Brooklyn Dodgers and general manager Branch Rickey had shattered Major League Baseball’s color barrier by starting Jackie Robinson in its lineup in April, 1947, the New York Yankees didn’t include a black player (Elston Howard) in its lineup until 1955.

In fact, their integration-resistant bigotry likely cost them one of the greatest players ever.

In June 1950, the Yankees scouted but passed on signing a young, extremely talented, but black center-fielder named Willie Mays who was signed nine days later by the New York Giants.

By the time Elston Howard took the field for the Yankees in 1955, Mays had already won a Most Valuable Player award and had led his Giant to a world championship in 1954.

Now clearly the Yankees did find an amazing center-fielder (Mickey Mantle) to replace the aging Joe DiMaggio but one might think the team could have found positions for both Mantle and Mays.

The point is the Yankees had first shot at Willie Mays — and let him go. (The Yankees also had first chance on a future hall of fame shortstop named Ernie Banks but let him go as well.)

What was quite clear to many at the time was that the Yankees were only giving lips service to racial integration. They did sign some black players but they were all long-shots to make the majors before Elston Howard (who they signed in 1950 but missed the 1951 and 1952 seasons due to military service and the next two in the minors).

Though the Yankees were certainly not alone in resisting the integration of Major League baseball (the Boston Red Sox didn’t put Pumpsie Green on the field at Fenway Park until 1959), the team has conveniently ignored its own, at least racially questionable, past.

Kate Smith was an amazing woman. It takes no courage to jump on a bandwagon that taints her legacy as a racial bigot and ignore a lifetime of achievement and service to her country. This was a woman who was routinely ridiculed and fat-shamed yet overcame considerable obstacles to lead an exemplary life. (On her TV show in 1951, she had Josephine Baker, considered by many as the first black superstar, as a guest. It was Baker’s first TV appearance.) 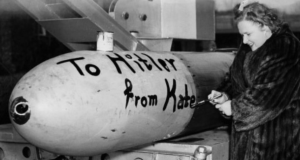 During World War II, Smith traveled over half a million miles to entertain the troops and raised an incredible $600 million in War Bonds (the equivalent of over $10 billion in today’s dollars).

When Smith recorded “God Bless America” in 1938, the song was so popular that both presidential candidates in 1940 used it as their official campaign song.

African-American sports commentator, Jason Whitlock, recorded a statement with his thoughts about the actions of the Yankees and Flyers. It is worth listening to here. (It is transcribed below).

“I’d like to say a word or two about Kate Smith, the NY Yankees and the Philadelphia Flyers. The NY Daily News reported yesterday that the Yankees quit playing Smith’s rendition of God Bless America during their seventh inning stretch after the club was made aware of Smith’s potential racism. The Daily News in Philadelphia reported the Flyers were cutting ties to Smith too covering a statue of Smith with a blanket.
“Smith a popular singer in the 1940s has been dead since 1986. She rose to fame in 1938 when Jewish composer, Irving Berlin, re-wrote God Bless America specifically for Smith and as a peace time protest of Adolph Hitler. Because of Smith’s rendition, God Bless America became this country’s second national anthem.
“Smith used the popularity of the song to raise war bonds during World War II. She’s credited with generating $600 million in support of the war effort. President Ronald Reagan awarded her the Presidential Medal of Freedom.
…
“Kate Smith recorded a couple of problematic, seemingly bigoted songs: “That’s Why Darkies Were Born” and “Pickaninnies’ Heaven.”
“I used the word, “seemingly,” because black civil rights hero, Paul Robeson, also sang “That’s Why Darkies Were Born” and the song was considered satire mocking the concept of racism.
“Smith sang “Pickaninnies’ Heaven” in the 1933 big-budget movie, “Hello Everybody.” If you know anything about Hollywood in 2019 or in 1933 you know that Kate Smith did exactly what she was told to do by the liberal elitist executives running the movie and music industry.
“Women won the right to vote in 1920. Am I supposed to believe that 13 years later, Kate Smith, a 250 pound woman who was routinely publicly fat shamed was calling the shots on what she did and didn’t sing in movies?
“Once again, our emotions and minds are being toyed with. The people who blackmailed the Yankees into dumping Smith’s version of “God Bless America” are not trying to clean up American racism. They’re sowing seeds of division and undermining American pride under the bogus pretense that they’re promoting racial harmony.
“No rational person of any color thinks eliminating a dead woman from Yankee Stadium improves race relations. In fact, it does the opposite. It creates the impression of a ridiculous racial double standard. A long dead white woman is held to a higher standard than any millionaire or billionaire black rapper.
“You want to hear an anti-black song? You don’t have to go back to the 1930s, go listen to my favorite rapper, Dr. Dre’s “Rat-ta-tat-tat.” He brags about never hesitating to put an n-word on his back.”

This was a “gotcha” victory for those who likely hated Smith, not necessarily for these songs but for the one song she is most famous for: “God Bless America.” These 1930s dormant songs are the vehicle but pulling down Smith and tainting what many consider our second national anthem was likely the primary goal.

To many just the title, “God Bless America,” is a major irritant. They want to hear nothing about God and have come to loathe America. Smith is despised mostly for emotionally elevating national pride to millions of America’s sports fans over the decades.

Neither the Yankees’ and Flyers’ organizations had the courage to take a stand.