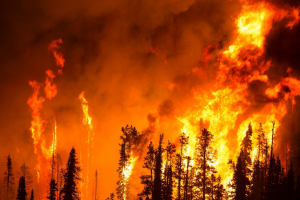 After Governor Brown blamed climate change (and so-called “deniers”), President Trump texted, “Billions of dollars are given each year, with so many lives lost, all because of gross mismanagement of the forests. Remedy now, or no more Fed payments!”

He has a point. In fact it isn’t just the state’s lack of responsible forestry that has been a major cause, it’s California’s other environmental policies that have contributed as well. The result is that when a tragedy like this occurs, Brown blames climate change — then demands the rest of America’s taxpayers pay his state year-after-year for its irresponsible management.

The state has a cap-and-trade program purportedly designed to penalize high-carbon use and promote fuel and energy efficiency. In 2015, this program lowered carbon emissions in the state by 0.3%.

Unfortunately, the wildfires last year burned about 1.2 million acres sending far more carbon into the atmosphere than was reduced by the carbon reduction programs.  According to the Wall Street Journal, the National Park Service and University of California, Berkeley, found in a study that “annual carbon releases from burning California wildland and forests-among the densest in the world-accounted for as much as 5% to 7% of statewide carbon emissions between 2001 and 2010.”

Another study from 2007 by the journal Carbon Balance and Management of 2003’s wildfires that consumed “only” 750,000 acres, found that the amount of carbon released equaled half of the state’s monthly carbon equivalent from all fossil fuel sources.

And though the state has lost over 80 lives and thousands of homes over the last two years it still doesn’t take forest management seriously compared to other environmental initiatives. It clearly subordinates the needs of its citizens to the “green” lobbyists.

This August, the U.S. Geological Survey concluded that nearly all of California wildfires are man-caused disasters so to speak. There are 130 million dead trees in the state that have been lying in wait for just the right spark and either the Diablo winds in the north and Santa Ana winds in the south to set them ablaze.

A clear example of this lack of fire prevention urgency? This year the Democratically controlled legislature appropriated just $30 million of its cap-and-trade revenues toward reducing flammable fuel in the state’s forests. This amount spent on forest management is a pittance compared to the $335 million that went toward subsidizing electric vehicles.

The current Camp wildfire was apparently started by Pacific Gas & Electric according to CBS Sacramento. Reports are that sparks from a power line near the small town of Pulga may have been the cause.

In any event, PG&E will be a clear target of lawsuits in the coming months. Governor Brown signed legislation in early September that would allow PG&E to pass the payments of all awards from lawsuits along to the power company’s customers in rate hikes.

Governor Brown is right about one thing: wildfire death and destruction unfortunately now do appear to be the new normal.