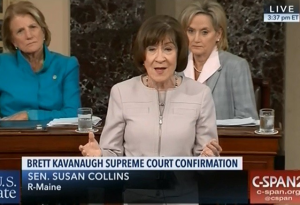 What Susan Collins did on Friday not only saved the Kavanaugh nomination to the Supreme Court. She also may have saved the #MeToo movement by her effort to keep it credible.

People who affirm signs like “We Believe All Survivors,” are delusional at best, bigoted at worst. Bigotry is defined as irrational prejudice. To believe all accusers, regardless of any corroborating evidence, is not rational. It is a religion-like, dogmatic embrace of a narrative: that women don’t ever lie about sexual assault.

Every person-man or woman-who makes a charge of sexual assault deserves to be heard and treated with respect. The #MeToo movement is real. It matters. It is needed. And it is long overdue.
…
Since the hearing, I have listened to many survivors of sexual assault. Many were total strangers who told me their heart-wrenching stories for the first time in their lives. Some were friends I have known for decades, yet with the exception of one woman who had confided in me years ago, I had no idea that they had been the victims of sexual attacks.
Over the past few weeks, I have been emphatic that the Senate has an obligation to investigate and evaluate the serious allegations of sexual assault. I called for and supported the additional hearing to hear from both Professor Ford and Judge Kavanaugh. I also pushed for and supported the FBI supplemental background investigation.
…

And with unemotional rationality she said:

You (Democrats) have taken a survivor who was not only entitled to your respect, but who also trusted you to protect her – and you have sacrificed her well-being in a misguided attempt to win whatever political crusade you think you are fighting
Mr. President, we’ve heard a lot of charges and counter charges about Judge Kavanaugh. But as those who have known him best have attested, he has been an exemplary public servant, judge, teacher, coach, husband, and father
Despite the turbulent, bitter fight surrounding his nomination, my fervent hope is that Brett Kavanaugh will work to lessen the divisions in the Supreme Court so that we have far fewer 5-4 decisions and so that public confidence in our Judiciary and our highest court is restored. Mr. President, I will vote to confirm Judge Kavanaugh.

For the #MeToo and #BelieveSurvivors movements, Judge Kavanaugh became the face of all male predators. He is the symbolic perpetrator; the focal point for the legitimate torment of many women victims of physical assault or authoritative dominance. He provided an easy-to-hit target for their pent-up fury. 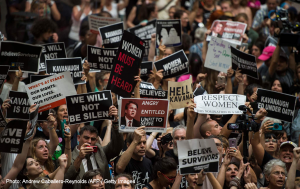 But more importantly for many protesters, the hearings provided a grand stage for the elevation of their “Believe all Survivors” movement with religion-like fervor. Kavanaugh was relegated to be the national representative for toxic masculinity and as such, had to be personally destroyed.

For many women though, even those who’ve been victimized, he was their unfairly accused husband, son, brother or father. They heard and evaluated all the evidence presented by all the accusers, including Dr. Ford, and found it nearly non-existent.

Beyond the time of the assault itself, many such women have refused to allow depraved men to have any additional impact or control over their lives. Though every bit as psychologically walloped as other victims by the act, they recover by their steadfast refusal to allow themselves to be perpetually victimized by some assailant from the past.

Then there are others like Dr. Christine Ford who have apparently allowed their assault, (no evidence it truly occurred in her case) to dominate their lives giving their attackers a lifetime of power over them. They reside in an emotionally enslaved state over a physically recoverable act. They have tragically succumbed to give their assailant permanent control of their psychological lives.

For the #MeToo movement to embrace any accusation of sexual assault by a woman with zero regard for its truthfulness puts all real victims into the same pool as the liars and deceivers. Such deception will ultimately foster greater skepticism for all claims of abuse, including all legitimate ones.

Additionally, for just the accusation alone to equal guilt without a rigorous, objective, evidentiary process does little but strengthen erroneous female stereotypes: emotions overriding reason and rational thought.  No one throughout the entire Kavanaugh process destroyed these stereotypes more than Susan Collins.

For #MeToo to produce a true upturn in our nation’s moral history, it needs to be but highly supportive of the true victims of sexual abuse but equally vigilant in identifying false accusers. Anything less would be anathema to a moral justice system and cause the movement to ethically implode.

No one, throughout the entire Kavanaugh nomination and hearing process, has demonstrated greater rational thinking and decision-making than Senator Susan Collins of Maine. She should be a national hero for women and applauded by all for her stance.

1 thought on “Sen. Collins not only saved the Kavanaugh nomination but the #MeToo movement as well”