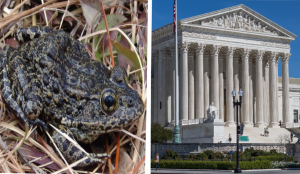 Unbelievably this property is about 50 miles from the frog’s closest habitat in Mississippi and even FWS agrees that if they placed frogs on this land, they wouldn’t survive. It would have to be clear cut first.  So for the frogs, this “habitat” is, well, uninhabitable.

The Pacific Legal Foundation’s Mark Miller who is representing Poitevent, asks, “How can his property be critical habitat if the property is not even habitat for the frog at all?

This is just another example in a long line of cases where the federal bureaucracy ignores the Constitution and does what it wants. Here’s another:

Back in the 90s, Brandt Child bought 500 acres in Utah with plans to either pursue the legend of long-lost gold hidden on this property or develop the land into a golf course and campgrounds. After his plans were in development, he was informed by FWS that he had about 200,000 endangered “Bruneau Hot Springs” snails (approximately 1/32″ long) in his lakes so he complied with FWS and stopped all progress.

The Wall Street Journal reported that he dutifully notified FWS when he found 10 domestic geese abandoned on his land. The federal enforcers immediately came to Utah and told him that the contents of each goose’s stomach would have to be examined and if any snails were found to have been consumed, Child would be fined $50,000 per snail found ingested!

He was thankful that none were found but not that his multi-million dollar property was now mostly useless.

The likelihood is that Weyerhaeuser v. U.S. Fish and Wildlife Service will be a split-decision and the 5th Circuit Court’s decision will unfortunately stand rendering the Poitevent property valueless. So even if the Democrats fail to stop Judge Kavanaugh from ascending to the Supreme Court, their delaying tactics may have already paid the Deep State some dividends.