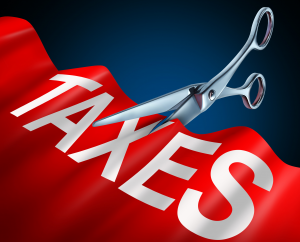 Over the last year most of those unintentional part-time workers have been reduced by 700,000 because they found full-time jobs which, over-all, increased by 3 million.

Those already working full-time had more opportunities to work overtime at time and a half. The Bureau of Labor Statistics says this added 0.3% to wages for a combined income gain of 3% or slightly above the inflation rate.

And most importantly none of the above takes into consideration the tax rate changes under the new law.

With a median household income in 2017 of $60,900, a married couple with no children taking the standard deduction and personal exemptions would have taken home about $51,100 before the tax rate changes.

It ultimately means this couple will have nearly 5% more disposable real income than they had last year.

And if they had a child? Given the increased child tax credit, this same couple would see their take home pay increased by 5.5%.