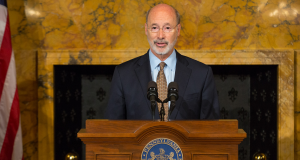 Pennsylvania’s governor stuck it to home health care workers when he issued an executive order stating that all of the state’s 20,000 caregivers would, for all practical purposes, have to join and contribute to the United Homecare Workers of Pennsylvania, a partnership of the American Federation of State, County, and Municipal Employees (AFSCM

Many of these workers are family members or live in the homes of those they are caring for. Most of the funding or payments to these workers comes from Medicaid.

The PA Supreme Court upheld his order, issued in 2015, last month. Justice Debra Todd said there is no problem with Wolf’s order since it is “voluntary, non-binding, nonexclusive, and unenforceable…”

This was a torturous interpretation of the order.

It is true that workers can opt out — but only after a full year of contributing to the union and then after going through a difficult bureaucratic protocol. In the meantime, these unions will confiscate 2% of their earnings.

Of course the ruling had nothing to do with the fact that AFSCME and SEIU donated nearly $900 thousand to Pennsylvanians for Judicial Reform, a super PAC that supported all three Democrats for the state supreme court in 2015 alone. For her 2017 retention campaign, Justice Todd got $33,500 from the two unions.