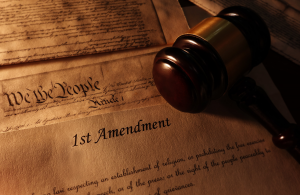 Most Americans say they love their rights formally acknowledged in the Constitution but shockingly, 40% of those surveyed by the Freedom Forum Institute could not even name one of the five freedoms stated and protected by the First Amendment.

Just one in eight could name two. And of the 1,009 Americans surveyed, just one person named all five (they are of course free exercise of religion, freedom of speech, freedom to assemble, freedom of the press, and freedom to petition the government).