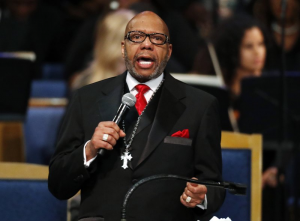 It wasn’t the bigots in attendance like Louis Farrakhan and Al Sharpton who were criticized at Aretha Franklin’s funeral. No, it was Atlanta pastor Rev. Jasper Williams who had the audacity to preach a message of personal responsibility.

It wasn’t Al Sharpton who was considered out of line.  Not Jesse Jackson either . It wasn’t even Louis Farrakhan who was criticized.  (Farrakhan again illustrated his bigotry as recently as February saying “Jews were responsible for all of this filth and degenerate behavior that Hollywood is putting out, turning men into women and women into men. White folks are going down…”)

Though many speakers turned their eulogies into political commentaries against President Trump, it was Rev. Williams who took the brunt of public scorn for taking shots at illegitimacy and uninvolved black fathers in the lives of their children. He also had the audacity to rail against Black Lives Matter, “It amazes me how it is when the police kills one of us we’re ready to protest, march, destroy innocent property. We’re ready to loot, steal whatever we want, but when we kill 100 of us, nobody says anything; nobody does anything.”

Apparently few wanted to hear Rev. Williams’ message: “…This change must come from within us. Nobody can give us things to eliminate where we are. We have to change from within ourselves.”